Me and Mum went climbing the rocks round the head at the beach the other day. It be lots and lots of fun! So much new things to see and sniff and show off my good climbing skills! I so very agile! Mum tooked lots of photos and video so it might take a few posts to show them all off.

We played wubba a bit firstly of all.

Here be some piccures without me in. You can get a feel for how cool the rocks be! They very fun and exciting to climb. We not usually get to go on them. You has to get the tide just right or they be too slippery and if you go too far round when it out then you can get stuck. 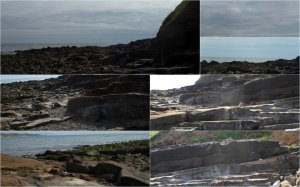 Mum has a new obsession with finding sea glass, so in her never ending BORING quest we is travelling to different parts of the beach. She did find some good sea glass here, but also had the camera out lots. I not sure which be more annoying! She keep wanting my attentions to take good photos, but Mummmm there be so much to look at and do! I practiced being siberian at first. 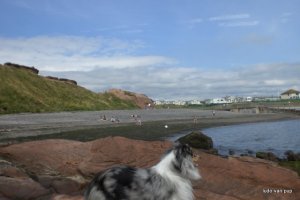 But then sausages woned me over. 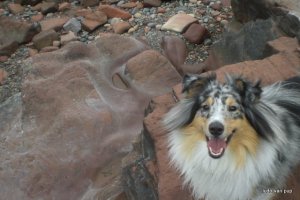 Now, i knows some of you. Hamish, at least, will appreciate the geo-geometry? omogy? The er- rocky-ness of these particular rocks.
These be a sandstone type of rock and they change lots all the time cos they get bashed about by the harsh sea a lot. We found some cool rock patterns, when Mum beed in school she first comed here with grandpawents and she tooked some piccures of some of the erosion (Does that really be a word Mum, you not making it up?) to show to her teacher cos she beed studying it in school. I will show you some interesting erosion stuffs another day. The head changing all the time, it part of a thingy what some (Mum say silly, I say way pawsome!) peoples like to do called the coast to coast walk. Where they walk from here to the other side of England. Well anyways, they start off at the head but over the years the path keep having to be moved in cos it dissappear!

During victorian times these rocks be tooked away, that why they be such good steps now, where they beed cut up to make the houses in the village and near by. Including the churchyard we looked at at the first Ludo’s lookings.

See them holes is from drilling.

Well, Mum complaining that her paws be tired. What a silly excuse. She say if I not like it I can just type myself.
Well ok! I wills!

hmm, Maybe I had better post more about the rocks in the week.

~lickies, Ludo
pee ess, come back tomorrow for Tricky T-day. Does not be forgetting, anyone can join in at anytime, you didn’t need to be in the current players list.