I am going to tell you a bit more about our family today. If you ever see us on Facebook, you may have seen some extra dogs hanging around in our photos. We already had my good buddy Rusty, who is my Grandpawents dog, but now we have some extra pack members.

Mum’s sister, Auntie Toni and mum’s nieces ‘the girls’ are living with Us and Grandpawents whilst they move to Cumbria. It is really amazing! I just love extra family members and I get really excited when they appear out of no where again so it is going to be really good having them around even more. Auntie Toni is really easy to bully into taking us for extra walks and if I am extra sneaky and I can bark and bark at her whilst Mum is not in the room and make her do things I want! Which is only bad if you get caught, of course.

Mum’s niece Abi adopted a puppy called Poppy. Laura over at Elanmore put us in touch with her breeder, as Poppy’s Dad is the same as for my new Neices and Nephews. Yes, I am a real Uncle now. That is very grown up, isn’t it? I think I will rename myself All Grown up Scamp now, instead of Little Scamp.

At first, we weren’t sure about having a puppy around. I think Ludo said ‘Oh no, not another one, take it back!’ Although, I’m not sure why. He is still pretending Poppy is not even around. But I really like her now. She sure is a fun and feisty little sheltie! She throws herself around all over the place and is super friendly. Mum says it is hard to get a photo of her because she wont stay still! Rusty got over excited about her at first and he can be a very reactive jack russel terror, but Mum did some positive training with him and now he likes her a lot.

Poppy and the girls came and stayed over and helped us do some gardening a couple of weekends ago. She sure bangs her head a lot. I don’t think I was that uncoordinated when I was a Not All Grown up Scamp.

More recently, we met cousin Ben. Ben and Auntie Toni are staying at our house and we all get on just fine. Ben is a labrador and he is 10, he likes our Dad a lot, but he is very good at listening and is showing us up a little bit!

He is a bit big, so it can be a bit worrying to play with him, but I am giving it my best shot. He is also not very quick and a bit of a pushover, so I have been able to gain a few extra toys by grabbing them when someone tries to play with him. I am very clever like that! 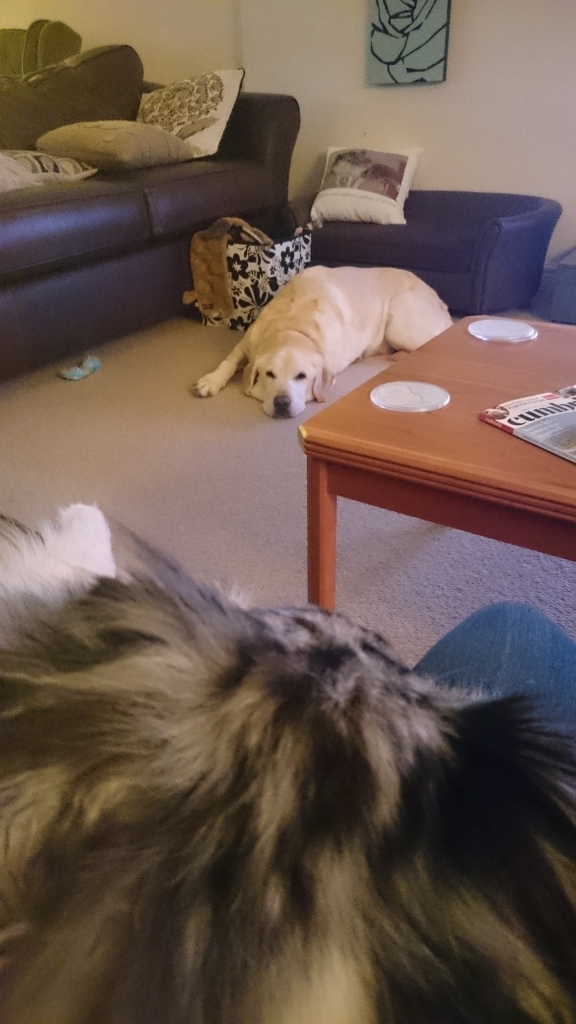 Ben was not really allowed in the living room in his old house, but I think we have cured him of that. Auntie Toni has conceded defeat too. He has soon picked up our good habits, like waiting for treats when Mum is going out without us. Dad says you cannot walk in a straight line in the house now, as you have to go around a dog. Don’t worry, Ben always looks kind of doleful, but he is always wagging his tail.

That photo was taken just before Mum and Dad went away to a wedding last weekend, so that’s why we are all kind of sulking.

In other family news, Ludo has had his stitches out and his surgery has healed very well (his furs are already growing back) and he doesn’t have to be a conehead anymore! We are all very happy about that, especially Ludo. We had a good game of bitey face after the cone came off. I have been very worried about Ludo and I have been trying to give him a good sniff and lick his funny smelling ouchies. I have licked his front paws better where he had some little holes, Mum said that was from the anaesthetic needles, but I just keep on getting told off for pestering him and Ludo shows his Really Mean Teeth to me. So I have been telling Mum and Dad that I am worried and whining and leaning on them and trying to get super close to Ludo. Mum says I am like piglet, going around saying ‘Oh dear, whatever shall I do?’. I like to eat piglets!

Aside from that happy part, the vet has told Mum and Dad that Ludo’s lump was something I have not heard of, but it is called a ‘cancer’, it is a type called a grade 3 mast-cell tumour. Mum and Dad need to speak to the vet some more about what to do now and the vets are talking to another special vet place, but the vet thinks he got it all out and they are quite common. I am sure Ludo will tell you how it goes. I think he will be ok though, now that he doesn’t have that silly cone on, and I am always here to lick him better. If he will finally let me!