Hurro! Hope everyone had a very nice Crisp mas day! We did, it be very busy.

We went to Grandpawents house for presents and lunch, then we went to TND’s Dad’s for more dinner and more presents. We slept all day on boxing day.

As usual on Crisp mas, Santa Paws had left us a present each to open in bed. We got a dried sausage each and a toy each. Arran tooked mine and of course once Arran has touched my toy I casnot play with it anymore on account of the baby brother cooties. But I did not do mindings acoss I helped TND open his present. I mostly just like opening the presents anyway. Sometimes I does not even look at what inside. I especially like helping open the people presents cos they usually really big. Actually, on Crisp mas eve I opened a present under the tree and Mum had to wrap it up again, it beed a wubba for Arran.

END_OF_DOCUMENT_TOKEN_TO_BE_REPLACED

First of all ‘Hello!’ to everyone reading my Crufts posts. I’m getting a lot of new views, so welcome strangers and to our regular friends, I hope you’re enjoying/not bored and don’t worry about missing posts/commenting as I’ve got lots of photos to get through!

Back to day two (Friday) at Crufts which was the Terrier and Hound groups. 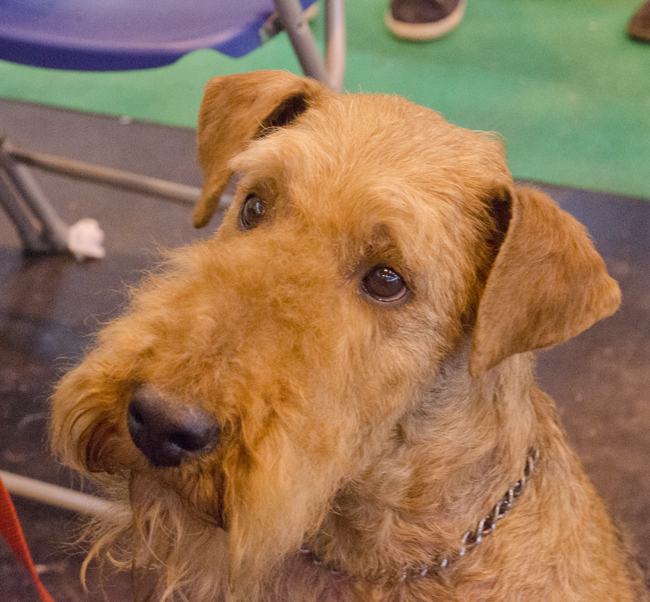 Molly the ice cream Airedale from a previous post in close up.

The Soft Coated Wheaton Terrier owners obviously have a keen sense of fun, a lot of them had these little miniatures made out of fur. 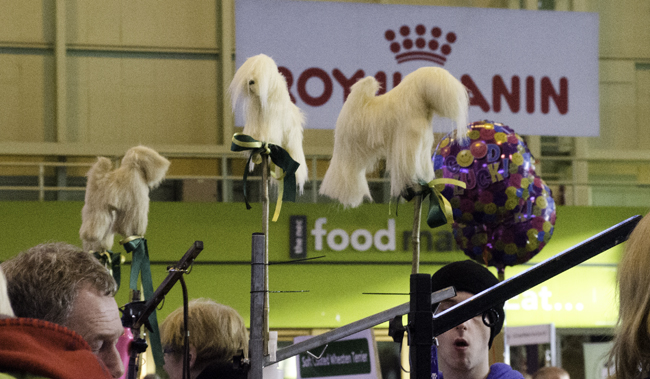 Gosh, terriers are so attentive to their handlers. 😉 or other dog’s handlers, same difference.

I’m not convinced these dogs are hounds, but it was nice seeing them relaxing/walking all over their people.

Another elegant hound, the borzoi.

Hounds are just so energetic. 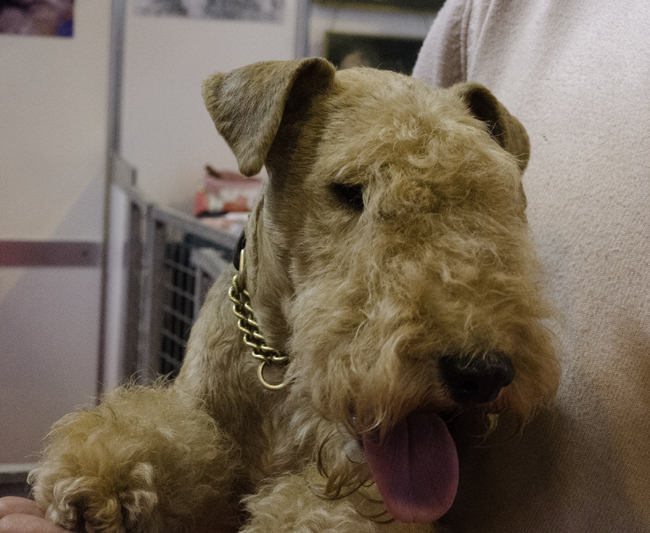 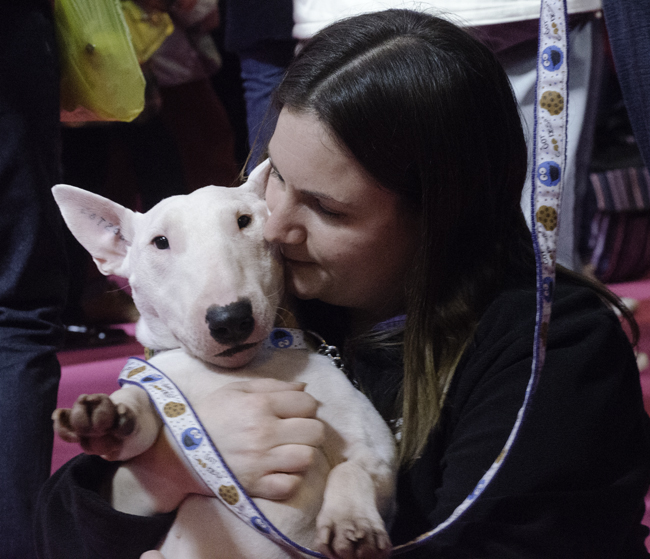 Just for Jo and Stella. This is Agatha.

And… The best terrier of the day, In my opinion at least. Our blog/facebook friend George!

George is the first blogger friend ‘I’ have met in real life. I know Ludo will be really annoyed that I met someone before he did. It was really fun meeting George and his secretary/Mum and thank you for all the advice! George has much better pics of himself on his Facebook but you’ll need to be a friend of his on there to see them.

In the meantime, Grandpawents report that another little terrier is getting beaten up by one Little Scamp. Don’t mind the mess, the little balls of stuffie and chewed up TND socks seem to be a new permanent feature in my house. 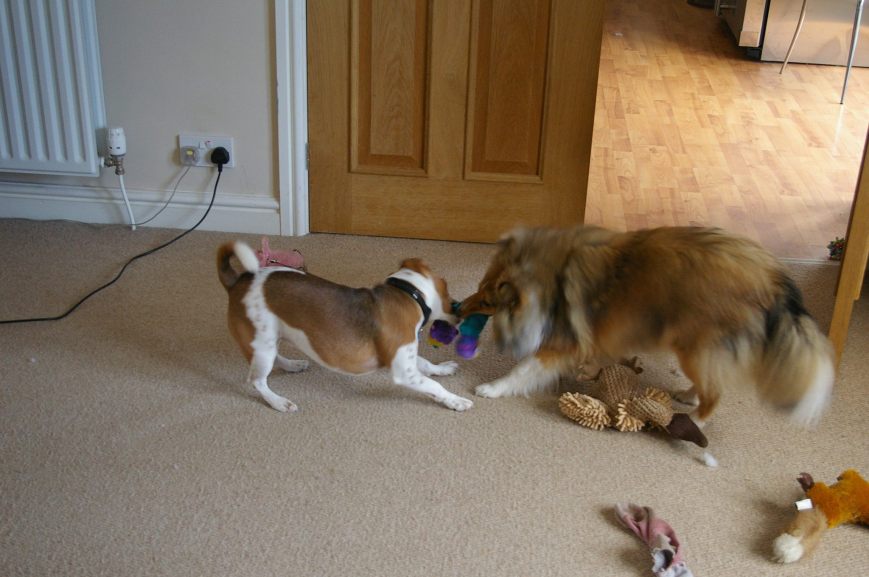 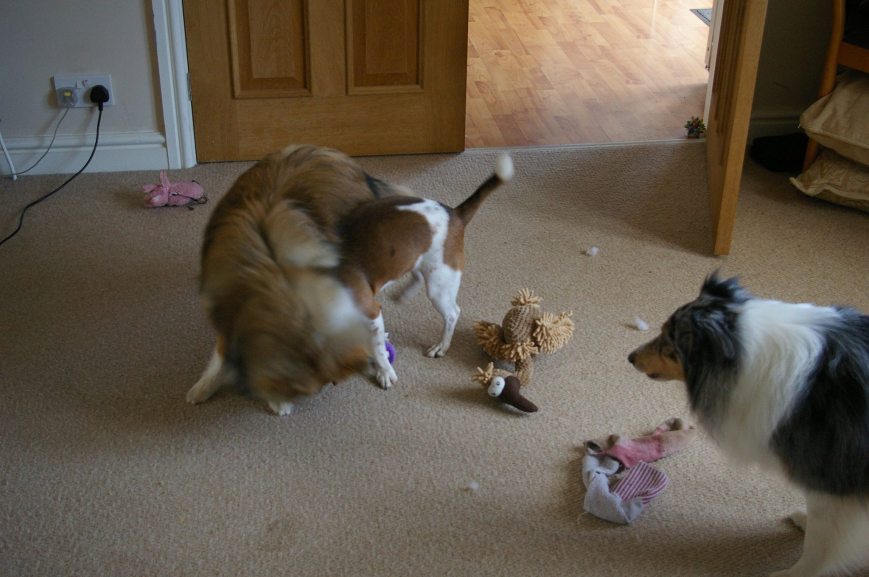 A while ago Mum had a day off work, and it be a nice day, but not too hot like now, so Mum tooked us (Grandpaw, Grandma and Rusty and me) all in her car to Wastwater.

Here the piccures. Rusty had a grand old time! He getting better at his recall and not reacting to things, but it do me near a little road and lots of sheep so he only got to go on his long line.
I teached him to swim for sticks. (Yes, we know, sticks be bad and we doesn’t recommend playing with them really. I never played with one before I met TNP, but TNP has never had a dog before and he started playing with sticks with me and now I LOVE getting them from the water. Mum makes us be really careful and only get them out of the water and no chewing them up or catching them in the air. It still can be dangerous… but then, we has heard of dogs injuring them selves in all sorts of ways)
Wastwater Mum’s favourite lake. It won ‘Britain’s favourite view’, in Mum’s job making holiday makers happy she always tell them… It is the deepest lake, and has the highest mountain, and it has the biggest liar. They laugh, but it does, the village near by hosts the world’s biggest Liar contest each year.
More photos here. 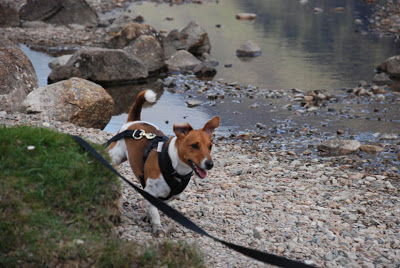 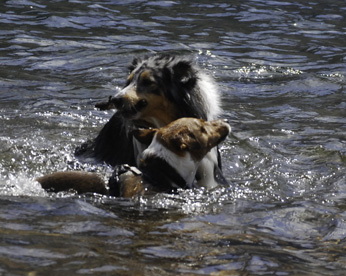 Mum always says I a lot smaller when I all wet. I guess Rusty just stays the same size though. But I will always be bigger than him, no matter how wet I get! 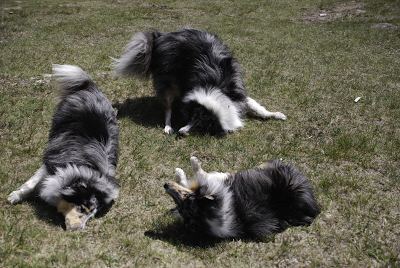 The sheep’s a type of sheep called Herdwick and they is special to the Lake District and very tasty.

They start out black and then go grey. 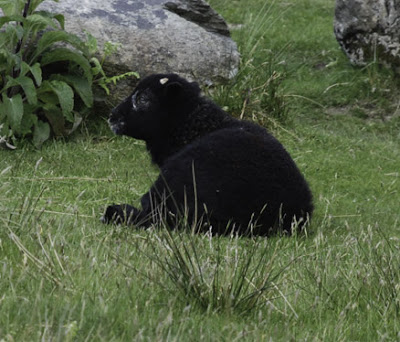 They likes to get in the way.
We stopped off at a cafe in Irton on the way back.

Rusty did very well, his first time ‘being out in public’ and eating and hasing to be a really good boy. He did want to bark at some labradors sitting a few tables over but he managed to refrain. 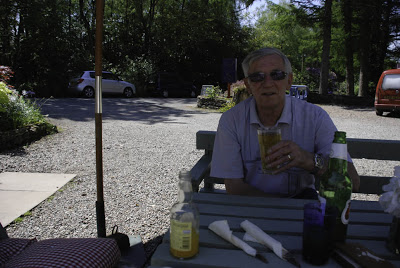 Can you believe it? An actual sunny day! I tooked Mum for a walk to our beach and I allowed Grandpaw and Rusty to come. Rusty did pretty well with not barking too much at the other dogs he seed. Although he did steal my toy!

I won sometimes though… Acoss

I a good sport though 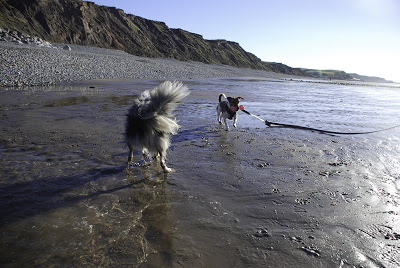 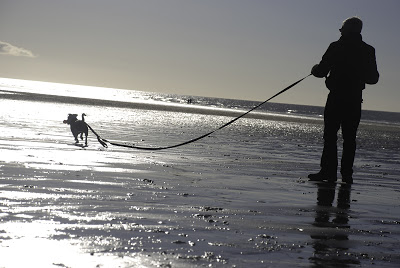 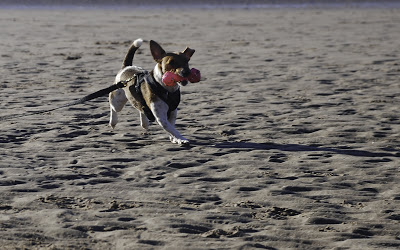 Here a not very interesting video of Rusty featuring narrative (barking) by me!

I had a really good weekend. Wait till you see what I did on Sunday! Some of you has already seed on Facebook. But you can see again.
~lickies, Ludo

Not many piccures I afraid. Mum’s camera not seem to be working very well.

We did the same as last year. TNP’s family came to visit and so we had lots of places to go. I liked getting attentions of course. There a little baby in the family now so she does steal some of my attentions away. But she ok. I mostly pretend she not there. We went round grandpawents for breakfast and present opening and then TNP went to his Dad’s and then me and Mum went round later for more presents! We had lots of nice days with nice walks and TNP and Mum home all day and nice visitors! 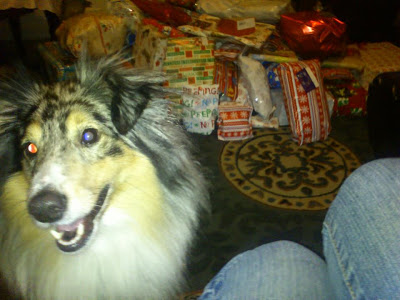 I is so good at opening presents now that I can help every one else open theirs too. Even if they not want to open it yet! Mum always leaves one present to open whilst still in bed. I got some gluten free treats.

See, I helped TNP open all his things. 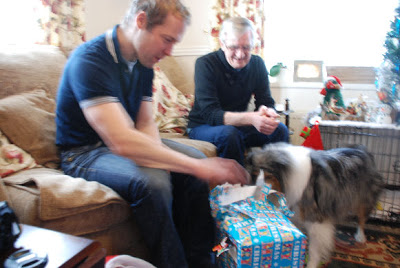 Grandma does her Crisp mas shopping early, so Auntie Penny had time to help herself to some of my treats.

Rusty did not even know how to open presents! He did get the hang of it after he got a very squeaky chicken in one toy. But of course, I much better at it. He be very excited and so this the only not blurry piccure Mum got of him dashing around everywhere.

My usual sitting at the dining table waiting for dinner pic. Nope i did not get to eat at the table again! Me and Rusty had Turkey wings for dinner. Rusty has goned on to the raw diet like me and he loves it. 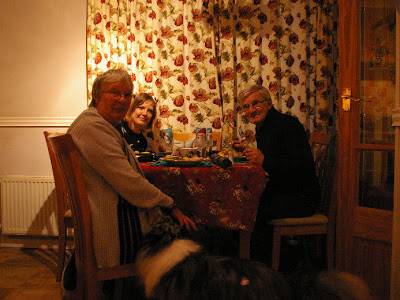 Self timer.
Mum got someone to paint a piccure for grandpawents of Auntie Penny. They liked it. They even cried a little.

During Crisp mas Week Mum tooked Grandma and me and Rusty to walk along the Harbour in town.
Rusty liked it, and he getting better about not barking at other dogs. Mum says I doesn’t help by just barking for the fun of it when he barking. hehe! 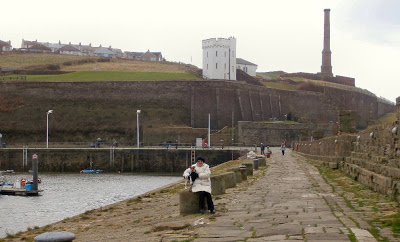 I got a lovely jumper from TNP’s brother and sister in law and some treats from his Auntie.

Me and Rusty play bitey face and chase lots now but we has not quite worked out playing with toys together. We has had one good game of tug of war but Rusty still a bit possessive of his toys if I pick them up.
But here a video anyway.
Phew! Zorsted! 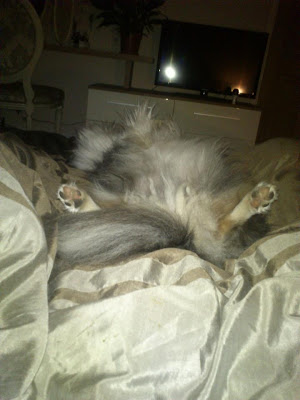 Not long till next year right??
~lickies, Ludo!

Well, I has beed thinking about it, and as much as I is not admitting to being wrong. (That could never happen right?)

Maybe the little guy not so bad?

Sally came to stay at Grandpawents for a couple of days and she did not seem scared by him. She just shoved him out the way and played with him.

I managed not to freak out too much when he sat right on top of me!

And… I has played with him. He really likes to play chase up and down the hallway!