This new little thing seems to be living at Grandpawents now. He has beed there more than a week! He even came to town with us to my Wayne’s World pet shop and he went on a shopping spree. He has his own bed, and collar and lead and food and toys now so it doesn’t look like he going anywhere. 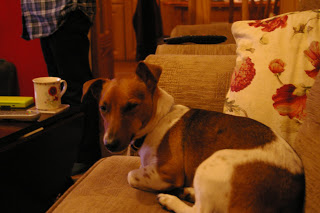 I does not like him.
He mean, he has little snappy jaws that snap at me when he thinks I is getting food. I does not understand it and I show him my big mean teeth and screech at him. He scary! Then he has the cheek to sniff me and wag his tail and try and lick my face. Plus all the peoples think he really cute and keep saying ‘aw!’ I is the only ‘aw’ around here thank you!

Mum says I will get used to him. But I does not think so. I wants Auntie Penny back!

He comed from a nice place called Matching Partners Canine Rescue and they called him Mr. Jelly Bean. We decided to call him Rusty cos it matches his colour and Auntie Penny got called Penny cos she beed the colour of an old penny. Grandpawents said they just could not handle not having a dog in the house. Rusty has beed sleeping on Grandpaws bed so far and everything seems very strange outside in the big old world to him, he having an exciting time and I think he loves Grandpawents and even Mum quite a lot already. Until he went in rescue I does not think he got to do many things. He about 10 months old. 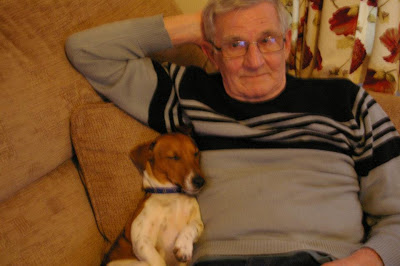 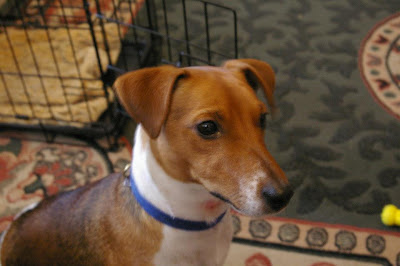 Well, Grandpawents seem to like him so I guess I will just has to get used to him after all. The things a dog has to do for his families!

pee ess: Happy Thanks Giving to all my friends in the US!