Hurro!
I really does keep meaning to blog! I has so many piccures and things to tell yous. But I has beed busy being busy and making the most of summer!

My pal Sally comed and stayed for a while.

We did helping of Mum and TNP building a patio in the garden and a path all around. 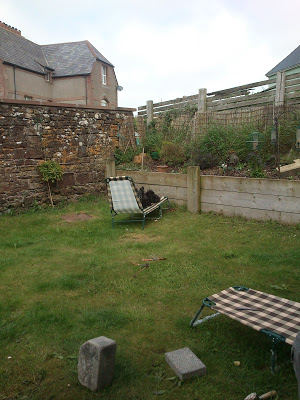 I has beed busy helping Mum doing gardening and weeding.

I has been visiting some lakes and nice places… Going to the beech.

And on cool walks to other beaches. This one an estuary near Ravenglass. It has lots of Roman stuff. We found some!

And I went on hol-ee-day!

TND got a new car!

Grandpawents moved house! They lives a whole nearly an hour away now. We helped them.

I has beed doing lots of activities with my dog club. We had an open day, did a demo, did some awards and the trainer of my class retired. I went to my first proper agility show, but it did not go too well. I left the ring to go find TND and I barked at the photographer.

I guess that about it.

Oh, Pee ess! I found a super good hiding place for my hoof treat. They’ll never find it there! 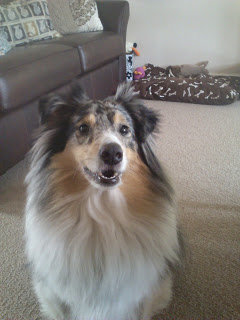 We just beed going about normal life lately, nothing very exciting happening. Sally still here, but going home monday or tuesday. We has lots of fun and I will miss her but she sure do hamper my practicing for Honey’s Dancing with the Doggy Stars!

Yesterday she even had the cheek to chew on my Stag Bar chew. 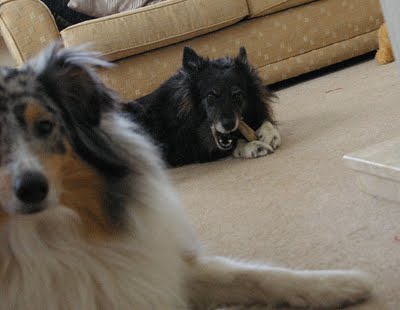 Um.. Mum, is you gonna let this continue?
But it ok, cos I got some empty food rubbish to lick. I still likes to chew up food packaging, only now I don’t steal it and run off and hide, Mum has gived up and just gives it to me now. This one had nougat in it.

Mum bought me and Sally a new toy each, I got a squeaky ball and she got a bear stuffie, really it to stop her destuffing all mine! I wont have any toys left. She likes my ball too though.
So that the this and this the that…

See Sally hiding over there by Mum’s legs? She ascared of my sis-fur! Really she scared cos she wants to heard them all up but Sally hates getting told off so tries not to go near them. Of course Faline be Faline and not care and walks all over poor Sally. Literally! Now Mum says I must point out that she would not let most dogs near the rabbits like this but she has knowed Sally for 8 years and is sure of her, especially cos when they first moved here they had a cat called Mitzey who be a very scary little cat (she went to the bridge afore I met her) she completely bossed every dog she met and Mum said when they first got little puppy Auntie Penny Mitzey would scratch her nose whenever she got too close. We have Mitzey to thank for the fact that Auntie Penny would never even think about chasing the rabbits and when Mitzey first met Sally, Sally went to chase her and was so suprised to be met with a bristly hissy scratchy ball of black fur that she hid and she was too scared to even go out of the room to go past Mitzey. Mitzey knew how afraid the dogs were of her and even when strange dogs would come to the house she would saunter right through them and sit in the middle of the room, flicking her tail and staring them out. BOL!
Most dogs would not be able to resist chasing my rabbit-dog siblings, even if they is used to cats because rabbits is prey animals and their instinct be to run away or freeze when they get scared. That the reason why Mum decided to get a puppy (me) instead of an adult dog from a rescue, because the rabbits got here first and they is not used to being cooped up in a cage. From the first day I came I got rewarded for lying down and being calm around them and when I got a bit older I’d also get mean voice if I tried to chase them. Plus it might have helped that Faline boxed at me if I got too close! Sometimes at bedtime I do help Mum herd them up. Although Faline do sometimes ignore me and run back through my legs, and really I is trying to get some of their food anyways. hehe!
See puppies generally want to be friends with efurryone! I used to try and curl up with my cat-bro Pepe all the time and sit with the rabbit-dogs too. Plus I got socialised very young to animals like pigs and chickens and sheeps when we visited old Daddy’s parents place.
So all this means I has a very low prey drive and chase instinct, except for a tennis ball!! I can walk right through a field of sheep without even batting an eyelid! Mum doesn’t know if that my natural way, or if it be because of the clicker training, or the socialisation or what, but we know Auntie Penny does not chase rabbits but she will chase sheep and Sally doesn’t chase sheep but she WANTS to chase cats and rabbits, she just wont cos she knows she shouldn’t and she scared of getting scratched.
Look at my good body language! I is turning my head as a calming signal to show my bro-fur Rocky and to prove to Mum that I is not threatening or interested in chasing him. Rocky really liked me and Pepe and we miss him a lot still.

Here me and Faline both begging for treats. 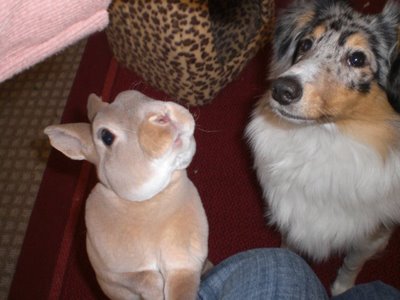 Here puppy me watching my sisfur Mina eat weeds. I tried to eat some too after watching her but they not taste nice.

And ehre me meeting sheeeps for the first time, they stamped at me. After this I decided I had more in common with rabbits and so stopped being a Shetland Sheepdog and became instead a Shetland Rabbit dog.

The bestest kind, of course!
The first one just of me and Sally playing.

These next two is me and Mum doing more practising for Dancing with the Doggy Stars. No editing in these. As I said in my other post, I get super excited pretty easily. You can see the big struggle for me doing the being still bit at the beginning, In Mum’s head I is supposed to look asleep and then when the into on the music finishes I jump up. Off camera Mum be moving around all excitedy and I sooo want to jump up and get her right away!! So it a bit boring and doing samey stuff and we go off camera a bit, well Mum the top of me does, so you might not want to watch it, but it do have me in it. So that be good huh? You can see how excited I get too.

Our internet be really shabby at the moment, cos of the bad weather Mum thinks, so we finding it hard to use the internets. We went to Grandpawents the other day to catch up on blogs, we hope it better soon.

Sally!
She my furiend and we has lots of fun playing together. When Sally’s pawrents go on hol-ee-day she comes to us… well, grandpawents, for her own hol-ee-day. She gonna stay with me and Mum at our place sometimes too. Like tonight. Me and Mum and Sally went on the walk across the golf course. 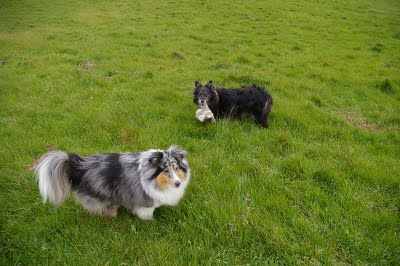 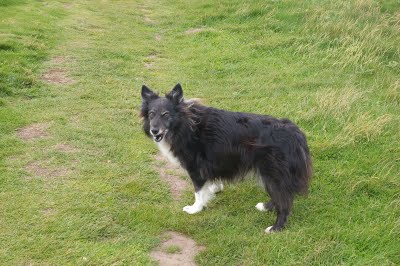 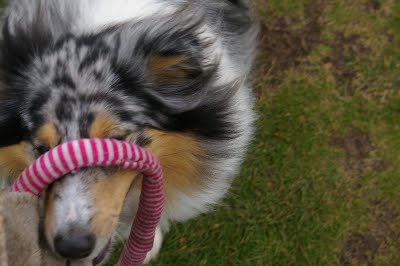 Sally always likes to has something in her mouth and shake it around, but I got it from her sometimes!
The cliffs be eroding quite quickly and you can see in places where there big holes and bits falling away. Soon the walk might go right through the golf course. BOL. Dogs is supposed to be on the lead, but of course me and Sally be super good dogs and doesn’t run onto the golf course like some dogs (Auntie Penny). 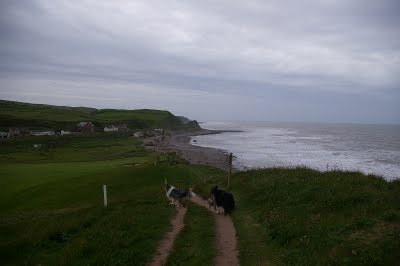 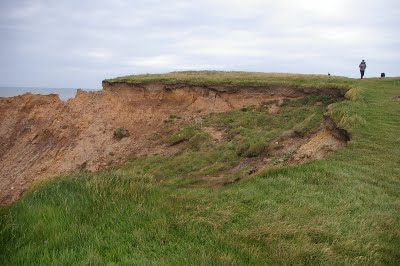 Sally be 8 years old now and she not the best bred doggy, so she starting to slow down a bit now and needs to lie down every now and then at the end of the walk. I let her go first cos I a big growed up dog so need to keep sniffing everything.
Mum tooked my elephant and carried it so Sally could have a good pant, we rested enough to have a game of catch at the end. 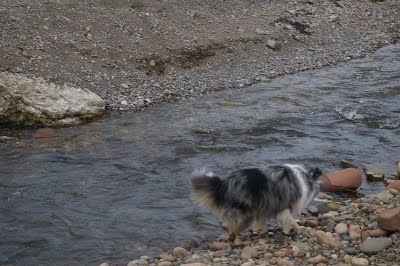 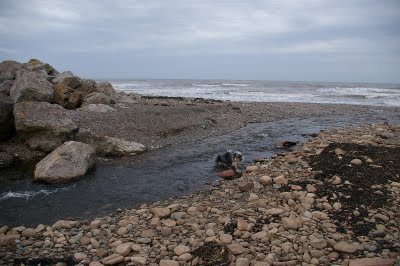 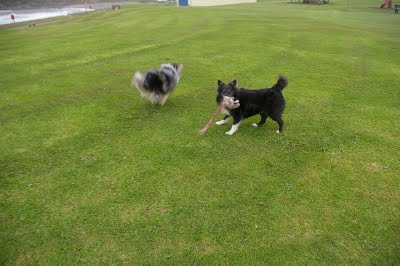 I really like having Sally here, she can play bitey face so much better than Mum or the rabbit dogs!
~lickies, Ludo

Mum not be having such a happy time with work at the moment, so we not really getting time to blog, or do anything really! She trying to get good quality time in with me. Plus she has to make her little animals when she not working. I wish Mum did not work, or at least worked somewhere better. oh well, to tide you over here some piccures of me and Sally when we went to Wasdale, we not done that for ages! *sigh*

I has my paws crossed for better times and I will come and visit you all soon! I really misses you all.

My pal Sally be here at the moment! We has lots of fun together and I learn how to be extra crazy from her. Normally the fun not so very fun as it be right now because we also has The Fun Police living at out house. And it go by the name of Auntie Penny!

But, Auntie Penny look like this now, so she not care about being The Fun Police no more. Hahahaha!

So we’s can do this: 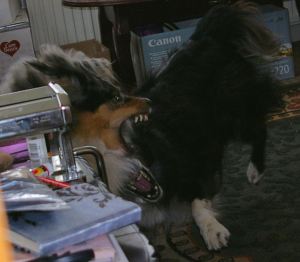 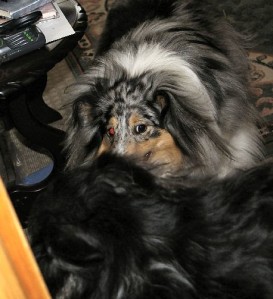 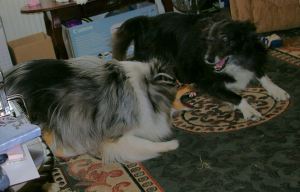 Also, Mum found this strange thing appeared in Molly and Faline’s home, anyone know what it be? She think some kind of waspy what be fun to chase? It only about the size of a golf ball.

oh, pee ess: Mum says I has to say that Penny be ok, she not done anything really, apart from she keep licking and biting her back end parts and tummy and legs. The vet gived her some treatment but thinks she just got in the habit, so she has to be a conehead now till we go back in a week.

pee pee ess: Efurryone we know beed ok, it turned out to be an awful thing, furry scary.